Hey there, this is my last time using the SMF Because of flash player is shut down. so I thought I made a tribute level so we all can remember this game. Mario had defeated the fake Bowser in World 1. Now, Mario has to cross the dessert. Can he make it?

Taking advantage of the quarantine that was stipulated in my state, I took advantage of my available time to advance my series. I really don't like to rush into building of levels, but now I've found that new SMF levels won't be able to be published after May 22nd, I have to finish this series soon, or I'll never be able to share everything I thought for this series in SMF2. I know that bringing innovations to this SMF2 lifespan is difficult, but I'm trying. Taking advantage that these are the last breaths of life for SMF2 (and also this series) I tried to use another new concept for me: a mix of normal mechanics and aquatic mechanics. Okay, I know not possible to swim in a vacuum like swimming in the water, but try to turn off your critical sense and use your imagination! Enjoy! 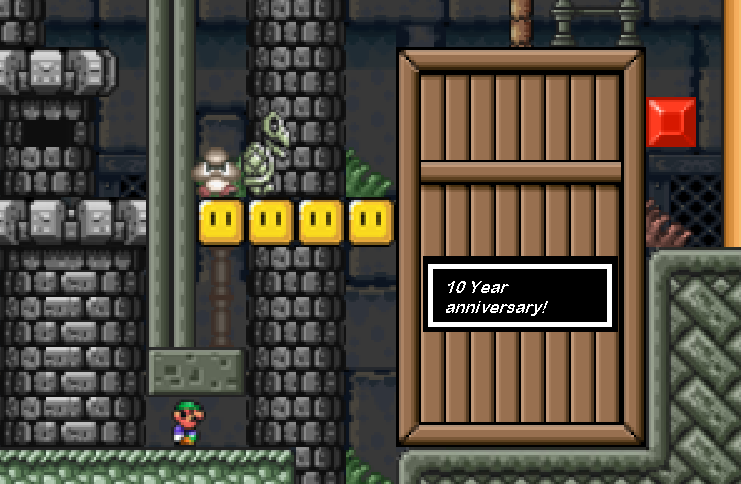 This level isn't supossed to be amazing, its just the result of me being nostalgic re-editing my first ever published level in PG. Also, the original level was posted on February 5th, 2010, so im a bit late xD You don't have to tell me how much you dislike the decorations. This style was pretty popular back in 2009-2010 and i'll keep using it. heres the original level: http://www.pouetpu-games.com/index.php?section=4&id=24730 -AndresLuigi 2010-2020

My first SMC Level! -It took me 9 hours to get used to the editor and wow, its complex. Especially how the game lacks interaction, and now I made a thing. -I tried to reduce the lag and the difficult is nice and easy. Time Consumed: 2 Days -Mario walks into the forest and ends up walking through a thick game trail, Will mario be able to be smart enough to protect his head among the many foes he's going to encounter along trail? Protect your head. **Time for me to finish the stingy SMF level in LP history**

Finnaly finnished!!!! Enjoy the level and please try to find all collectables >:) It defeats the purpose of the level if you go straight to the end. there are many moons and 1-ups and secrets! Did I say moon? Yes because the 3-up moon has joined SMF2R!!! This item is much more powerful than the 1-up, granting 3 extra lives. Also added a lil easter egg or two to other game levels... Now go Somari, enjoy your adventure!! If you want to see some vids of me playing it, here: https://www.youtube.com/watch?v=PV0lhg40Sas https://www.youtube.com/watch?v=4DPl-NjDPS4 Play here: https://nitrogamer914.wixsite.com/remixed-flash-2

Super Iggy Bros. - World 4-Fortress: The Million-Year-Old Fortress Iggy enters a very, but very ancient fortress on top of the desert's canyon, which was originally the place where a very old woman lived. Her name was Lirtha Megrand, and she was so old, that a bunch of prehistoric creatures that she took care of still live in this fortress nowadays. However, the castle looks pretty modern with all the interesting decorations and thrilling puzzles. The answer to that? Just one name: Bowser. In his path to hide away with Iggy's friends, one of the places he passed through was this fortress, which he decided to modify completely to make it a bigger challenge for Iggy. However, our Argentinian hero will NOT give up yet. He saved three out of all his friends, and he still is going in the search for the rest. Go on with him as he travels through Lirtha's Million-Year-Old fortress! Also, if you want to search for it too, there's a secret exit in here as well, so if you want to get it too, go look out for an orange orb that's hidden somewhere! Before anything, I'm gonna explain the new SIB method that will be used to tell if next level is gonna be a normal level, a fortress or a castle. * If the next level is intended to be a normal level, the end will just feature a regular small brown brick castle tiling. * If the next level is gonna be a fortress, it's gonna be similar to a normal small brick castle, but with small differences (In 2-2, it was a gray variation, in the updated version of 4-4, it is a small brick castle with multiple flags, and in World 7 (idk which level though) it will be tiled slightly differently, with extra windows and doors) * If the next level is going to be a castle, it will be a very big castle, like the ones you see in the end of every world ?-3 in the original SMB. Well, that aside, let's go with the rest of the description. This level is pretty good looking. I love how I did the scenery and the design, it all was pretty awesome. I didn't have a way to use the SMF1 golden fortress BG for this, so instead I just used a random golden fortress BG made by MarioMaster7771 that I found in the CBG section of LP. And turns out, it works out well! Also, this level is kind of a spiritual successor to my level from early 2019, "Some Castle Level" (https://www.levelpalace.com/level?id=16801), which is why a lot of the challenges and design choices are similar between both levels. Also, the character that I mentioned in the level's story that owned this fortress in the series' lore (Lirtha Megrand) is a reference and a pun on the Argentinian actress and TV host Mirtha Legrand, who is so old and has been on TV since so much time ago that everyone just keeps making jokes about her age, so I thought making a joke about her for this series would be funny lol. Clues to find the secret 1-up: "The lava may stop the shell from going further. But what if a tool found a bit later in the level could actually be useful for that?" So I hope you like this level, and of course, feel free to give me your opinion. Here's my plan for what 4-Secret and 4-5 are gonna look like: 4-Secret: SMF1 water level, remix of 3-A from New Super Mario Bros DS 4-5: SMF1 regular desert level

Bowser has set up a machine to amplify the power of his minions. In Wayward Plains, Bowser has put an amplified angry sun above it, to melt the ice caps. And heres the game you play it in: https://luigibonus.com/files/games/smcbeta/ Current Alliance: Agent Y. Mario Princess Peach (?) Luigi (?) Misc. Toads (?)